To Whom It May Concern:

I am not a cow
Nor a pig
Nor your slave.
I am not chattel.

My womb is my own.
I have felt the quicksilver movement
Of early life within.
Life I created with my partner.
Not you.
Life I nurtured, that I endured hardship for,
By my choice.

It is true that
Women are vessels
For unborn children.
But if something is wrong with a vessel
Or what is stored in the vessel,
What would you do?
If you had a clay pot with cracks in it,
Would you try to store water?
Or would you dump out the water
And patch the cracks
Before trying to use the pot again?
If you had grain stored in that same pot,
And it became moldy,
Would you keep the grain in that pot
Until it returned to dirt?
Or would you throw away the grain
And hope for a better harvest next time?
It is the same for woman and unborn child.

Yes, it is true that
Women are vessels built for bearing children.
But a woman also has free will
And the ability to judge if her body or mind is cracked,
Unable to be used for this purpose.

Again, it is true.
We women are vessels.
Our bodies are designed for carrying children.
And being mostly men, perhaps you don’t understand
The symbiotic nature of mother and unborn child,
The psychological and physical connections that
Manifest itself in strange and wonderful ways.
So you can’t know the torture of carrying a dead or broken child within.
You can’t even begin to empathize.
Why, then, would you think you can decide for us?
Force our bodies to your will?
Lock us away for the crime of being a woman?
Drive us to deeper and darker depths of our souls
In the name of your supposed Christian family values?

I understand that you are afraid,
That the world is shifting around you,
That light is being cast on all the lies you have built your life around.
I understand that you feel your power is slipping
Like sand through your fingers.
It is frightening to have the very core of your being
Shaken.
I understand, and I sympathize,
But I do not tolerate.
Your eyes WILL be opened by Truth.
Your worldview WILL change or you will be drowned in the rising tide.
You will NOT control my body or the bodies of my children.

I am a woman.
I am not a cow,
Nor a pig,
Nor a man.
I am stronger than all of these.
And we will prevail against you.

I really hate that this is still relevant in our society.

I am drowning in my tears.
No way to stem the flood.
The sandbags of my mind
Were breached long ago.

I am drowning in my tears,
Weeping for the world.
Weeping for humanity.
Eternal mother and daughter,
Warrior queen, virgin sacrifice,
And holy prostitute
Intertwine, each betrayed.
Five voices cry out as one
As the saline river flows on.

I am drowning in my tears,
And I float above it all.
Distant, drifting…
Sweet asphyxiation.

Last week, I posted my illustration Vessels with my poem An Open Letter from The Little Book of Insurrection or the Poetry of My Discontent up on Tumblr. Within a short span of time, it had been reblogged on an anti-feminist site with a long diatribe showing how it is a prime example on how bad all feminist poetry is. It wasn’t excessively cruel, and the language wasn’t overtly violent or offensive, but I was amazed that someone had expended the energy to create an anti-feminist Tumblr account and deliberately searches the feminist tag for posts to mock. I went back the next day, though, and the reblogging had been removed. I don’t know if they actually did a little research and realized that my collection was only 1/12th of feminist leaning or what. I’d be interested to know their reasoning behind taking it down. 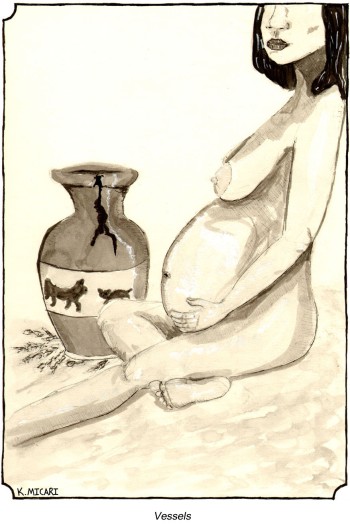 I, honestly, was more entertained than anything. And I felt rather bad that someone hates an entire group of people so much that they waste their time and energy on such a fruitless task. Truth be told, An Open Letter is my least favorite poem in the collection. It’s too long but didn’t lend itself to cutting it down. However, the message it contains is important, full of my righteous anger at the legislation being passed against women. I also love this illustration I created to accompany it.  And as a woman, the issues pertaining to women concern me.  So I included both illustration and poem in the collection.

A confession: up until my mid-twenties, I was one of those women that wanted nothing to do with the term “feminist”, except in a historical context. Part of my desire to be judged as an individual and not take on the characteristics of any group, I’m sure, more than anything else. But the pendulum of equality has really swung in the opposite direction since the economic downturn in 2009, for everyone, and I accept the label of “feminist” now. It’s difficult to be aware of the facts and NOT take on that label. Although, in broader terms, perhaps I’m more a secular humanist than anything.

Anyway, today, on Martin Luther King Jr. Day, I am acutely aware of my privileged position in society. As a well-educated white hetero married woman, I am granted access to opportunities and have a much easier time than I might otherwise. I mean this in all sincerity, that to only be judged based on gender and class and the fact that I’m an artist (and maybe to a certain extent my intelligence – smarts can be a detriment these days) means that my life is a piece of cake comparatively. But that doesn’t mean that I am incapable of fighting the good fight, working towards more social justice for everyone.

It seems to me that people who care passionately about societal issues, of which there seem to be a growing number, are all fighting different battles in the same war. We can’t, as individuals, possibly fight on every front simultaneously, and if we try, nothing will ever be accomplished. So it seems in our best interest to respect each other’s chosen path, to tolerate and try to understand alternate viewpoints, to build each other up rather than tear each other down, regardless of whether you’re fighting for women’s rights, class rights, race rights, education, animal rights, climate change, etc. The end goal, enabling everyone to live a quality life, not free of strife or sadness, but free of oppression and hatred, is the same. But we won’t ever get there if we hold our own path as superior to any and all others, in my opinion.